It feels good to be back home in humble Yreka. The house is still standing and all the stuff still works (thank you, Otto, for tending things!). The leaves on the Japanese maple and the Liquidambar have turned to their autumnal hues of magenta and scarlet. The pointer on the thermometer outside dipped below freezing last night. It really is November. It was over 80ºF when we were in LA mere days ago! It’s pretty clear we’ve had some rain up here since we were gone, we sure needed it and we’ll need a lot more before the year ends. Living in what is close to a desert makes me appreciate rain even more than ever. Rain isn’t always a blessing, though. My friend Betty Rosen Ziff lives in Lomita, part of what Angelenos call the South Bay. We stayed with her and her husband Stuart on both sides of our journey and they have the misfortune of sitting on a parcel that floods when the rains come. A few years ago they were nearly wiped out—emotionally as well as financially—by the storms that hit SoCal. Some crappy engineering of the city’s storm drains, not to mention indifference by the powers-that-be, set them up for a huge, watery mess. And how about some proper disclosure from the previous owners, the real estate agents, the finance people, the title company, and the government inspectors who’ve got their paws all over the purchase of the home? Yeah, we all know about “caveat emptor” but our capitalist economy works better when ethics and honesty are part of transactions. So I’ll be tempering my prayers to the rain gods with “soft and gentle and a little at a time for my friends down south, please.” I’ve added the link to the Lomita Flood Relief Facebook page to my blogroll. They’ve got a lot of work ahead of them to convince the City and County that they have a responsibility to residents to properly channel the floodwaters. Seems obvious, I know, but unresponsive elected officials are the latest fashion. They’ve also got lots of work to do on their place to prepare for future storms, and are always on the lookout for smart, creative types who can imagine potential solutions that won’t require a small fortune to implement.

We were only gone for three weeks on this trip, which is about average for us. Seems longer, though, as we were quite road-weary yesterday and still recovering today. In 2001 we went overseas and were gone for eight weeks, and we did a ten-week trip in 2005 which was my entire summer vacation. So this one ought to have been easy. I think the uniqueness of the train experience (which was mostly great) and the unusual event we attended (NoirCon) made this trip more challenging. The Giants being in the World Series certainly added a level of anxiety—only fans as emotionally attached as we are can appreciate that. I refuse to say it was harder because we are both older, I prefer Bob Dylan’s “Ah, but I was so much older then, I’m younger than that now” refrain from “My Back Pages” when thinking about aging. Travel, for me, has never been about just getting somewhere. I’ve always appreciated the transformative nature of journeying and seek to learn more about myself and grow in new and unexpected ways. These things don’t show up immediately as they need time to percolate and I’ll be musing on them over the next few months. Speaking of musing, here’s me in an apparently contemplative mood: 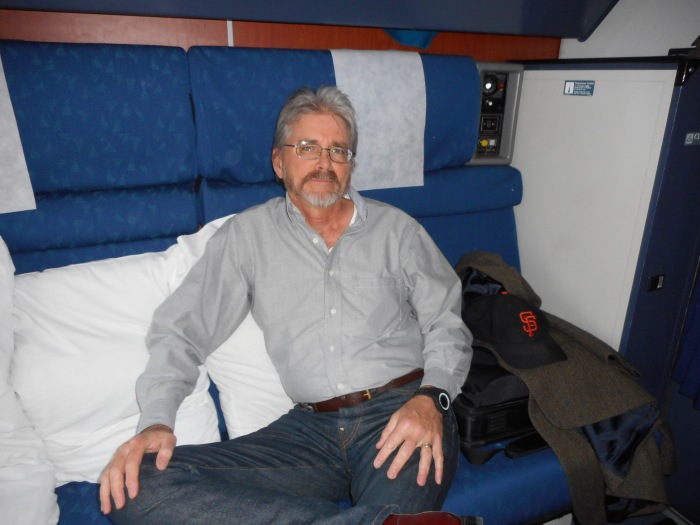 I notice when I don’t smile I look grim. I was far from grim—I was relaxed, happy, and eager, in fact. We were just about to de-train in Chicago when Sue snapped this. I smile a lot actually so it’s odd to see myself with a neutral look. One of the things I came home with was twenty pounds of books. You can’t go to a literary event without accumulating more books! I’ve too many books as it is, integrating the new ones into the collection will take some time. Here’s a picture of my new acquisitions:

That’s a signed hardcover first edition Walter Mosley on the upper left! “Easy” Rawlins is back at it in the mean streets of Los Angeles. Mosley is a remarkably versatile and accomplished author—crime fiction is only one of his specialties. The other hardcovers and the rest of the top row were all freebies. The bottom row were all purchases. I’m especially excited by the new Hard Case Crime (Samuel Fuller’s lost novel “Brainquake”) and the two in the middle from Jonathan Woods (“Bad Juju” and “A Death in Mexico”). Gutter Books, naturally, is also represented with the “Noir Riot” and “Trouble in the Heartland” collections. A surfeit of literary goodness!