There’s a link on the Nevada Department of Transportation’s website you can click to request a state road map. Now I love paper maps, the digital versions just cannot compare, so naturally I ordered one before our trip to the Silver State. The map makes a point to include the breve accent mark over the first “a” in the name, namely “Nevăda.” That’s because Nevadans rhyme the second syllable with “bad”. It may originally be a Spanish word but it’s spoken with an American flavor. Much like Californians say “san-azzay” for San Jose and not “sahn-hoesay.” The word means “snowy” and thus we can see why the mountains that mark the western terminus of the Great Basin are called the Sierra Nevada. I’ve been through Nevada in the winter, and they get some snow, but it’s not the most appropriate descriptor. The state averages less than a foot of the stuff annually, and only eight inches or so of rainfall. Most of that falls on the high mountains, of which there are many. Had I been a Spanish explorer I would have called the place “desierto” or “malpaís” or something to indicate the unrelenting aridity and rugged topography. Maybe the conquistadors were stuck in a blizzard one winter and could think of nothing else.

Nevada lies wholly within the physiographic region known as the Basin and Range Province. Dozens of mountain ranges, mostly running in a north-south direction, cover the entire state. All are about a mile higher than the surrounding lands which are mostly broad, flat valleys, many of them dry lake beds. The plains, or basins, are from 4000 to 5000 feet above sea level. They tend to be no more than a few dozen miles wide but three of four times longer. Imagine a giant hand making scratches in the desert sand, pushing up long, thin peaks between the fingers and gouging troughs between them and you get some idea of the landscape. A drive eastward on I-80 from California does not give you the full picture as it follows, for the most part, the Humboldt River. However looking left and right from the car you can see numerous examples of the ranges and their corresponding basins. You do climb up out of Winnemucca and drop down only to climb again before Carlin and Elko, and then again after Wells before dropping and crossing the border into Utah. But to really experience the unique terrain you have to leave I-80 and take US-50 which bisects the state from the southern tip of Lake Tahoe in the west to Great Basin National Park on the eastern edge.

On our recent adventure we left I-80 at Fernley to pick up US-50 and we stopped in Fallon for gas. This is a good thing to do in Nevada. Always stop for gas and keep your water and other supplies well-stocked. People are generally friendly, and will help a driver in distress, but distances are vast and outposts of civilization few and far between. We headed east towards Austin but ventured off the highway near Eastgate to pick up Nevada Route 722. This well-maintained gravel road climbed the Desatoya Range at Carroll Summit, dropped into the basin, and then climbed the Shoshone Range at Railroad Pass before dropping into the Reese River Valley. The Reese is a big stream by Nevada standards and the Valley supports a surprising amount of cattle ranching. It runs north and empties into the Humboldt near Battle Mountain. The Humboldt, like all Great Basin watercourses, disappears into the sere landscape further west. Hydrologists call this an endorheic watershed, meaning one that has no outflow to external bodies like the Pacific Ocean.

Our destination was the Toiyabe Range on the eastern edge of the Valley. The mountains had an abrupt fault scarp on the west face, reminiscent of the west side of the Wasatch Range near Salt Lake City—which marks the eastern terminus of the Great Basin. The Toiyabes are mostly a pinyon-juniper woodland, with single-leaf pinyon pines (P. monophylla), Utah juniper (J. osteosperma), and mountain-mahogany (Cercocarpus ledifolia) the dominant evergreen species. The open areas are mostly waist-high sagebrush and their rich aroma fills the air. But we were there for the fall colors and the deciduous tree that produces those displays is the widespread Quaking Aspen (Populus tremuloides). In this country the aspens are found in riparian zones which as you can imagine are narrow bands in ravines, canyons, arroyos, gullies, and draws that contain the sparse watercourses. Willows and cottonwoods share the space, too, but they don’t have the same visual appeal. With its flat petioles the leaves of the aspen wiggle oddly in the slightest breeze and when an entire grove gets to trembling at once it’s quite a sight. With the onset of autumn the greens turn to yellows and deep, almost-red oranges and the displays are spectacular especially in the sea of olives, celadons, duns, greys, ochres, and earth-tones that most of the countryside sports.

East-coasters may not think much of fall colors in the West as they are spoiled by breathtaking swaths of maples, hickories, beeches, birches, ashes, and whatnot. Our region is not famed for autumnal richness, but that’s what makes these patches in the arid highlands so appealing—their scarcity. On our hikes up San Juan and Cottonwood Creeks we thought of the aspen groves as plentiful and enjoyed a marvelous palette. Alas, I was too busy staying hydrated in the surprising heat to bother with photographs. You’ll just have to go yourself and see. I do have a photo of the Toiyabes from the Smith Creek Valley just to the west: 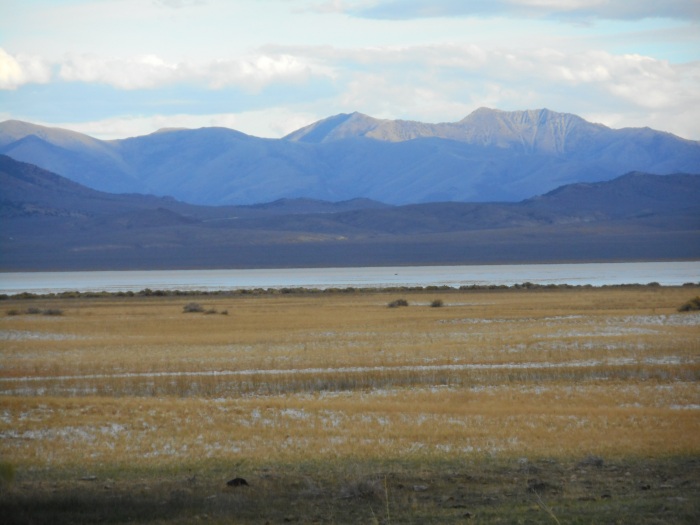 2 thoughts on “Nevăda, part I”