EROEI is not a Star Wars character but rather an acronym for Energy Return On Energy Invested (also written as EROI). It takes energy as well as capital to exploit a resource. Ideally the resource is valuable enough that the investment of dollars needed to get it is worth it. But what of the energy requirements? How much gasoline, diesel, natural gas, and electricity does it take to get a barrel of oil? And at what point does the energy invested become too much? After the oil peak in the 1970s we have come to rely more and more on improved extraction technologies (e.g., “fracking”) and lower-grade resources like shale and the oil sands. This so-called “tight” oil is increasingly the target of our insatiable lust for the black gold. Think about picking fruit from a tree. You get the low-hanging stuff first, then need a ladder, a bucket truck, or the heart of a daredevil to get the rest. That’s where we are with oil.

In Alberta they mine about two tons of sand to get a barrel of oil. That’s for the easy stuff that’s close to the surface and where they can use open-pit mining techniques. Electric shovels scoop up about 100 tons in one pass and fill giant trucks that can haul about 400 tons to the processing facility. Here’s what the equipment looks like (from the Caterpillar website): 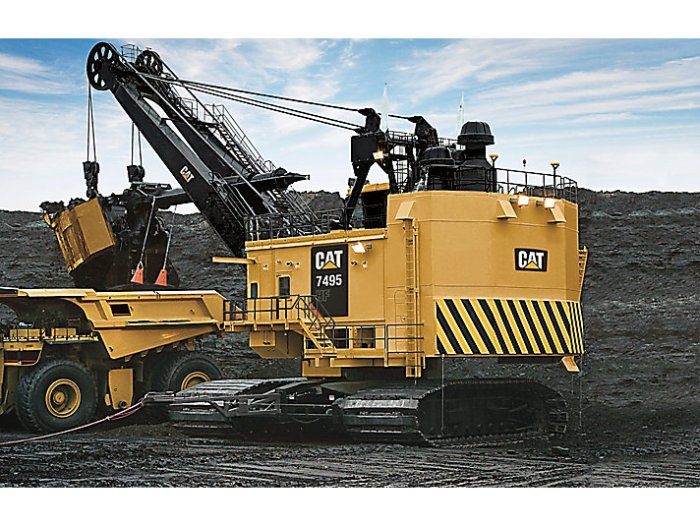 According to calculations made by J. David Hughes of the Post Carbon Institute (in Drill, Baby, Drill) the EROEI for tar sands oil is about 5-to-1. That’s because the bitumen has to be upgraded—separated from the rock it sits in and and diluted to reduce its viscosity so it will flow in a pipeline. Just digging the stuff up is a 12-to-1 venture, the additional processing to obtain the “synthetic” crude that can be shipped to refineries is where the real cost comes in. Note that I have not looked at economic or ecologic costs, just energy requirements. Here’s a picture of part of the process, a “coker tower” (from the Suncor website), where petroleum coke is extracted and used as fuel:

So is 5-to-1 a good deal? According to EROI of different fuels and the implications for society by Hall, et. al. the average global EROEI for “conventional” fossil fuels is about 20-to1. So the numbers tell us what we knew intuitively, that the new sources of oil are not as energy efficient as the old ones. This is the thing—our demand is increasing. More and more people in the world want the good life and that good life is energy intensive. Our planet holds, still, enormous resources of fossil fuels. Due to their energy density and transportability these fuels will not be replaced any time soon. But the easy pickings are already picked clean. The stuff we go after now is harder to get and much more expensive. In fact, low oil prices make the exploitation of these resources increasingly difficult. When oil was $100/barrel it made sense to chase after them. When the price of crude drops the economics are hard to justify. Consumers and voters like cheap gas, but that’s short-term thinking. Only when the price of oil is high will North American tight oil, whether from Alberta, North Dakota, or Utah, be worth it.

3 thoughts on “Athabasca and EROEI”