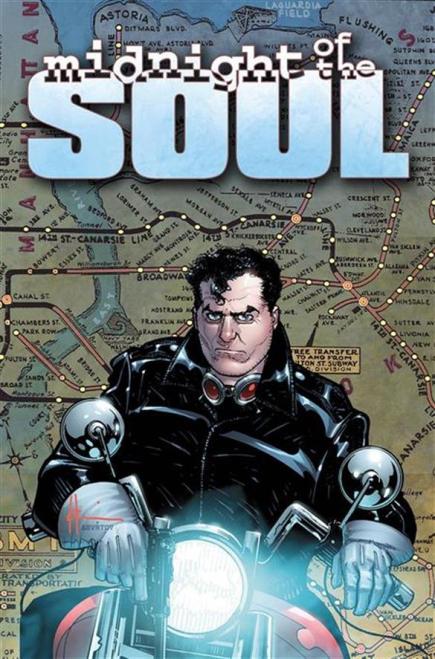 Did I say comics? I’m sorry, I meant graphic novels. That’s the adult term for picture-stories. But make no mistake, they are still comic books. Some of the best crime writing out there is produced by Berkeley’s Image Comics, in particular the extraordinary duo of Ed Brubaker and Sean Phillips who have given us Criminal, Fatale, and The Fade Out, masterpieces all. And they have a new series, Kill or Be Killed, coming out next month (you can bet I signed up for that!). But the folks at Image have an enormous variety of stuff, all the classic things we associate with comic books like superheroes and teenagers and whatnot, along with fantasy, horror, suspense, sci-fi, etc. You want something from their catalog you’ll find it. I like crime fiction and what I like to call “noir” and there’s plenty of that, too.

I recently signed up for a monthly delivery of Midnight of the Soul from heavyweight writer and artist Howard Chaykin. As you can see from the issue #1 cover above it’s beautifully illustrated, and that’s good, because it’s an ugly tale. At least so far. Our hero, Joel (pictured), is a veteran of Normandy and the Bulge as well as the liberation of the death camps. He’s deeply scarred by his experiences and to top it off has a serious problem with alcohol. His therapy has been writing alternate-history stories in which the Nazis win WWII. He can’t sell a thing—big surprise—and after five years of trying his wife finally runs out of patience and tells him to get a paying job. He then discovers that she’s not only two-timing him, she’s been working as a stripper and a prostitute while claiming to be a court reporter. Joel, enraged, tracks down and kills her boyfriend/pimp, and narrowly misses shooting her. Back home, he goes a little crazy and realizes how fucked up his life really is and decides it’s time to make some changes. He hasn’t left his neighborhood on Long Island for three years and hasn’t left New York since he was discharged from the Army. So, he hops on his motorcycle and heads west. Thus, the story begins.

Issue #2 will be here in a few weeks and I’m looking forward to it. The whole thing is very much an homage to the classic films noir of the post-war period. I usually buy my comics in graphic novel format (re-packaged issue collections in book form) but this time I decided to actually subscribe to the individual issues as they come out. Image Direct makes that really easy and I have to hold myself back from having a dozen or more on my list! I just discovered that Mr. Chaykin has a new series coming—also for Image—and I will likely go all-in on that one, too. This is my first exposure to his work and it’s obvious he’s a brilliant and original talent. I don’t know if comic book writers and illustrators (Chaykin does both) are still seen as lower on the food chain than novelists and other artists, I hope not, it seems clear that fine work comes in many forms. Do yourself a favor and check out what they have to offer at Image, or visit your local comic book shop and see what’s on the shelves. You’ll find something to like, I’m sure.