Skip to content
HomePeepland: you want it for Xmas 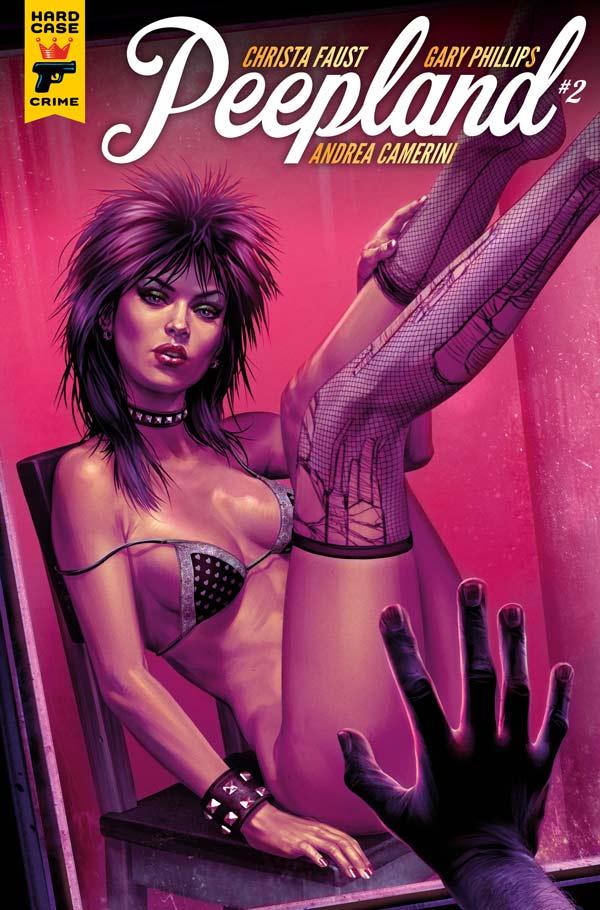 Hard Case Crime and Titan Comics have teamed up to create a new noir comic called Peepland. I just got issue number one in the mail last week and I have to let everyone know how great it is and that it would make a terrific stocking-stuffer. Pictured is the cover for #2 which I just ordered. The lead writer of the series is one of my favorites from the Hard Case stable, Christa Faust. She is the author of the 2008 novel Money Shot, featuring Angel Dare, and its 2011 follow-up, Choke Hold. Both are great and Angel is a unique and original noir hero(ine). The covers of both books were done by the brilliant Glen Orbik who sadly passed away last year. Faust is joined on the by-line by Gary Phillips, an author with an enviable résumé and veteran of several mystery series both in print and graphic form. I first encountered him via his excellent 2009 novel for PM Press, The Jook. The Peepland story takes place in New York City in the late 80s in the red-light underbelly of Times Square with its peepshows, strip clubs, and porn shops. You get bad guys, killers, and cops straight away and a couple of likable if somewhat marginal protagonists. A perfect noir stew!

So much good stuff is happening in the comics field these days. Take a look at Image Comics in Berkeley, for example. Many people assume comics and graphic novels are kid stuff and can’t possibly be good literature. They are wrong. Don’t believe me? Read some and find out for yourself!

I was not familiar with the artist, Andrea Camerini, but his drawings are crisp and beautiful and complement the story perfectly. Credit also has to go to colorist Marco Lesko who captures the lurid side of things with bright, bold hues. Good comics are like good movies—the various parts have to mesh together to make them work. No problem here, these folks are pros and the first issue kicks ass. Can’t wait for the next installment!

Take another look at the cover above. You want it, don’t you? Well, what are you waiting for, go buy it!