‘Thule’ is an ancient Greek word meaning a far northern place. Historians have considered such locales as the Shetland Islands or coastal Norway as the source of the idea. Prince Valiant, Hal Foster’s famous comic-strip hero, is from Thule. The United States Air Force has a base in Greenland (at 76°31′52″N) less than a thousand miles from the North Pole called Thule. The Romans added the modifier ‘Ultima’ (the last or final) and gave us the modern expression meaning “the furthest reaches of the world.”

Nit-picking Latinists will tell you to say OOL-tim-uh tuh-HOO-lay but modern English speakers will likely stick with ULL-tim-uh THOO-lee. In classical Latin you say all the letters (tuh-HOO), you don’t smush the “t” and the “h” together, something inimical to our native tongue. But Cicero (KICK-air-oh) and Caesar (KYE-sar) aren’t around to correct our speech so we can say SIS-er-oh and SEE-zer if we want.

NASA just released their best composite photograph of the farthest object ever explored, a hunk of rock in the Kuiper Belt they’ve dubbed Ultima Thule: 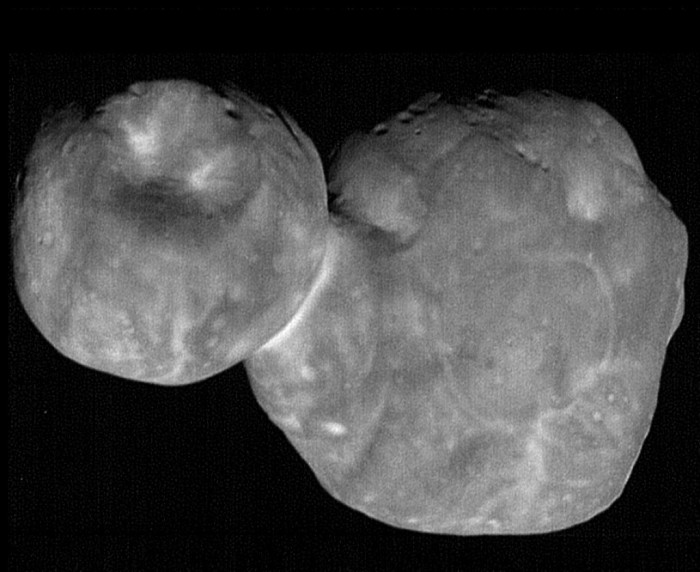 They say it is like a flattened pancake attached to a dented walnut. The Kuiper Belt is a massive circumstellar disk of material that lies outside the orbit of Neptune and extends about two billion miles beyond that. Neptune is 30 AU from the Sun and the Kuiper Belt reaches another 20 AU further. An AU is an Astronomical Unit, that is, the approximate distance of the Earth to the Sun (93 million miles). The Earth is 1 AU from the Sun. Ultima Thule is 44 AU or about 4.1 billion miles away.

When distances are this vast it becomes appropriate to talk about them indirectly in terms of time. The fastest phenomena we know about is light. Light travels 186,000 miles per second, and thus a light-hour is about 670 million miles, a light-day about 16 billion miles, and a light-year almost six trillion miles. Our nearest stellar neighbor other than the Sun, Proxima Centauri, is 4.2 light-years (25 trillion miles) away. ‘Proxima’ is Latin for “closest.”

Ultima Thule is 6.1 light-hours from Earth. The spaceship that photographed it was traveling about 32,000 miles per hour and got within 4,000 miles of the object on the first of this year. New Horizons was launched in 2006! That is an extraordinary feat of navigation. A signal from New Horizons, because of the distance, takes 6.1 hours to return to Earth. A “light-hour” or a “light-year” is really a distance measure, not a time measure. You may remember from high school that distance is rate times time, so the rate (186,000 miles per second) multiplied by time (a second, an hour, or a year) gives you a distance.

And this is the lesson of Ultima Thule. It is really, really, really far away. And in between here and there is a whole lot of nothing. Actually there is a lot of stuff, but weird stuff like solar winds, electromagnetic fields, dark energy, cosmic rays, and whatnot. Not the normal stuff we think of like rocks and water and air. And the other lesson of Ultima Thule is there is not much to it as its diameter is only 18 miles. By comparison the dwarf planet Pluto (New Horizons’ original mission goal) is 1447 miles across.

I’m really impressed by the NASA scientists, engineers, and technicians who pulled off this marvel of exploration. What a journey! Those are moving targets, you know, and the launch pad—Earth—is moving, too. I remember during the heyday of the moon flights critics would often say something like “we can put a man on the moon but we can’t solve world hunger.” Well, yeah. Launching a rocket is mostly an engineering problem. World hunger, poverty, pollution, the exploitation and victimization of persons, the impacts of climate change—the list goes on—are not so amenable to analysis. Those are much more multi-faceted things and touch on the un-quantifiable: human nature, politics, nationalism, philosophy, religion, sociology, history, etc. Economists do an awful lot of math but I’m still suspicious of any field that comes up with half a dozen different reasons for the same damn thing. What we learn to do in one field doesn’t necessarily transfer to another.

But I do think the big problems like how to build a free, just, sustainable world for all of humanity can be attacked even if they can’t be solved in the mathematical sense of the word. Differential equations only have to be approximated to be useful, for example. So solutions don’t have to be comprehensive, they can focus on little pieces at a time, and they can evolve as we learn more. The important thing is to make the effort and not be daunted by the scope of the task. After all we have no place nearby to go to, and the places we can get to aren’t exactly hospitable. I do think we will find life on Mars, but it will not be anything we can relate to, something more like a virus, a mold, or a chemosynthetic hydrothermal vent creature. It will be a opportunity for wonder and excitement, but we’ll still be stuck living here, so in the meantime we ought to do right by our home.